There were two fourth-place finishes in the finals on a day when all three Team SA swimmers in action broke South African and African records at the 2022 World Para Swimming Championships in Madeira, Portugal.

Kat Swanepoel came within 0.10 of a second of dipping under the one-minute barrier when she twice broke the SA and African records in the women’s SB3 50m breaststroke.

The 34-year-old Tokyo Paralympian finished fourth in the evening final in 1min 00.10sec, only 0.45sec off winning the bronze medal. Earlier, she had shattered the SA and African records, finishing third in her heat in 1:00.98. That was nearly seven seconds faster than her qualifying entry time of 1:07.25, a remarkable improvement. She went even quicker a few hours later to lower the national and African marks again.

Alani Ferreira was also in record-breaking form. She was the first Team SA swimmer in the water at the championships and produced a personal best at her first attempt.

Taking part in the women’s S13 100m butterfly, the 23-year-old, twice a Team SA Paralympian, clocked an African record in 1min 18.56sec. That had her touching the wall in sixth position in her heat won by Brazil’s Santiago Gomes in 1:07.00. For Ferreira, her time was nearly half a second quicker (0.45) than her qualifying entry.

“I’m very happy with my race,” Ferreira said. “I didn’t have the buildup coming into Worlds that I wanted, and this isn’t my main event, but I can’t be anything other than happy with the result, to get a PB and a record in my first swim.”

In Tokyo last year, Ferreira had swum the 100m butterfly in 1:20.25, which itself was four seconds faster than at Rio 2016, where she competed while still in matric.

In the evening final she again lowered the African record, finishing seventh in 1:18.17 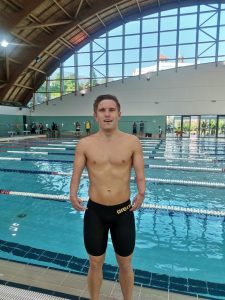 Christian Sadie (pictured) went straight into the men’s final in the 200m Individual Medley SM7 and carved 1.62sec off his entry time when also finishing one spot out of the medals, timing a South African and African record 2:34.08. He was almost 10sec clear of the fifth-placed swimmer, Rudy Garcia-Tolson of the US.

The other Team SA member competing at these World Para Swimming Championships is Cornelle Leach. All of Ferreira, Swanepoel and Sadie represented the country at last year’s Paralympics in Tokyo.

More than 500 athletes from 59 countries are competing at the World Para Swimming Championships in what is the largest international Para sport event to take place in Portugal.

Madeira’s capital of Funchal is more than just the hometown of footballer Cristiano Ronaldo – the island has a history of staging international para-swimming events as the venue of the European Open Championships in 2016 and 2021.