SuperSport Schools celebrates one year of the best of school sports

Media Release: SuperSport Schools celebrates one year of the best of school sports

SuperSport Schools celebrates 365 days of broadcasting the best of school and youth sports action in Southern Africa. The OTT channel has grown to become one of South Africa’s leading school and youth sport platforms; the go-to place for live and on demand content for the passionate school sports community. 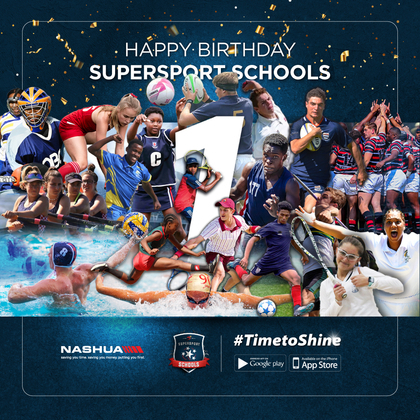 Since launching in April 2021, SuperSport Schools has broadcast over 5000 live matches and 16 sporting codes to devices and screens far and wide across the globe, despite half of the year being cut short due to Covid-19.

Apart from the unparalleled coverage, some highlights include:

Speaking of the achievement, SuperSport Head of Commercial, Rendani Ramovha said: “The highlight for me is seeing the vision becoming a reality. It’s very easy to ideate and to have a strategy of how to launch something, but to see how the SuperSport Schools product is gaining momentum and how the public is getting behind the product, that’s the biggest milestone.”

The operation has evolved throughout the year, adapting, and adjusting to fit the unique demands of the zealous South African sports fan. Although the popular sporting codes have captured most of the viewership, lesser-profiled codes including canoeing, padel tennis, rowing, squash, basketball, water polo and tennis have also had their time to shine.

From Johannesburg, Kimberley, Mookgophong, Nelspruit, Hilton, Matatiele, Mdantsane, Camps Bay to Windhoek; the SuperSport Schools cameras have shone the spotlight on talent from all backgrounds and walks of life.

“What is special for me is that we capture the moments that people care most about,” SuperSport Schools GM, Gerhard Steyn explained. “In athletics, it often happens on our platform that more people watch the heats than the finals, it’s different to the Olympics where everyone mostly waits for the Final. In our schools’ space, people care about the kids who participate, they care about the U14c match or the fourth team hockey. That is special, it’s an important contribution to the sports community in the country.

“The opportunities that our coverage has opened for young athletes has been inspiring,” he added. “We’ve had athletes using our footage to apply for scholarships to international universities and funding, that would have never happened in the past. If you look at the talent and achievements that have been captured in the South African school sports space, the future of South Africa sport seems to be in a good space.”

In the past six weeks, over 3000 matches have been broadcast. Put into context, if those matches were spread over six weeks, SuperSport Schools would have been able to show school sport live for 10 hours a day, on eight channels, six days a week for six consecutive weeks!

1 min video reel looking back at some of the highlights throughout the year - https://we.tl/t-mo02xsWqaR

Stakeholder interviews talking about the platform and achievements - https://we.tl/t-IbMaaJzE