South Africa and Pakistan settled for a draw in their opening hockey game at the 2022 Commonwealth Games in Birmingham.

Pakistan and South Africa play out to an opening draw

South Africa twice led but were pulled by the Pakistanis on both occasions as both teams settled for a draw in the opening game of the Commonwealth Games in Birmingham.
South Africa and Pakistan took each other in their opening Commonwealth Games encounter in Birmingham this morning. Its been just over a year since South Africa stunned the world with a massive victory against Germany at the Tokyo Olympics and they were looking to bring that same resilience to a tournament that was originally scheduled to take place in South Africa. 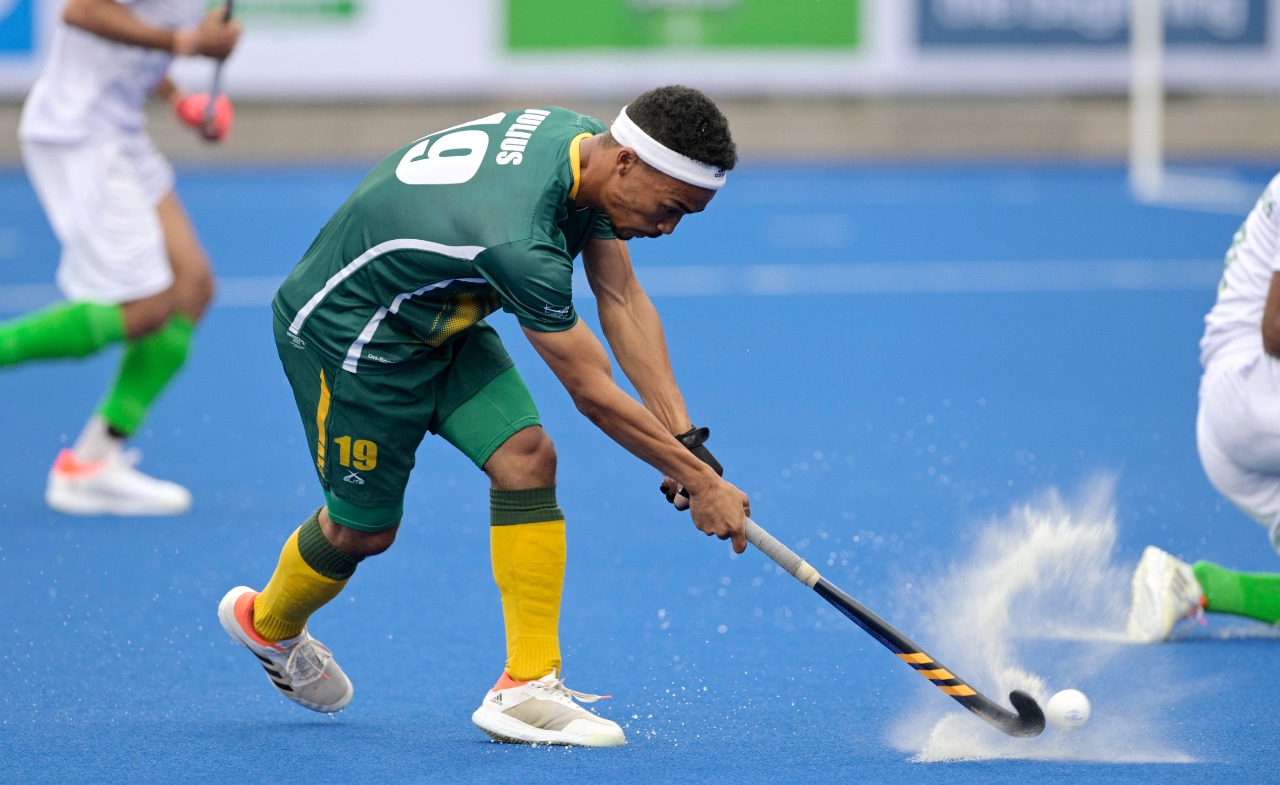 The South Africans were awarded the first penalty corners of the game when they received two back-to-back, but the first runners from Pakistan were able to deny Matt Guise-Brown and it remained goalless. South Africa created the next best opportunity through Ryan Julius but the shot was well saved. Pakistan then had their goalkeeper yellow carded for intercepting outside the circle and the Africans had another penalty corner. This time Connor Beauchamp was the option and the execution was perfect to give the South Africans the lead! It was an entertaining opening quarter that came to its conclusion with the South Africans 1-0 up. 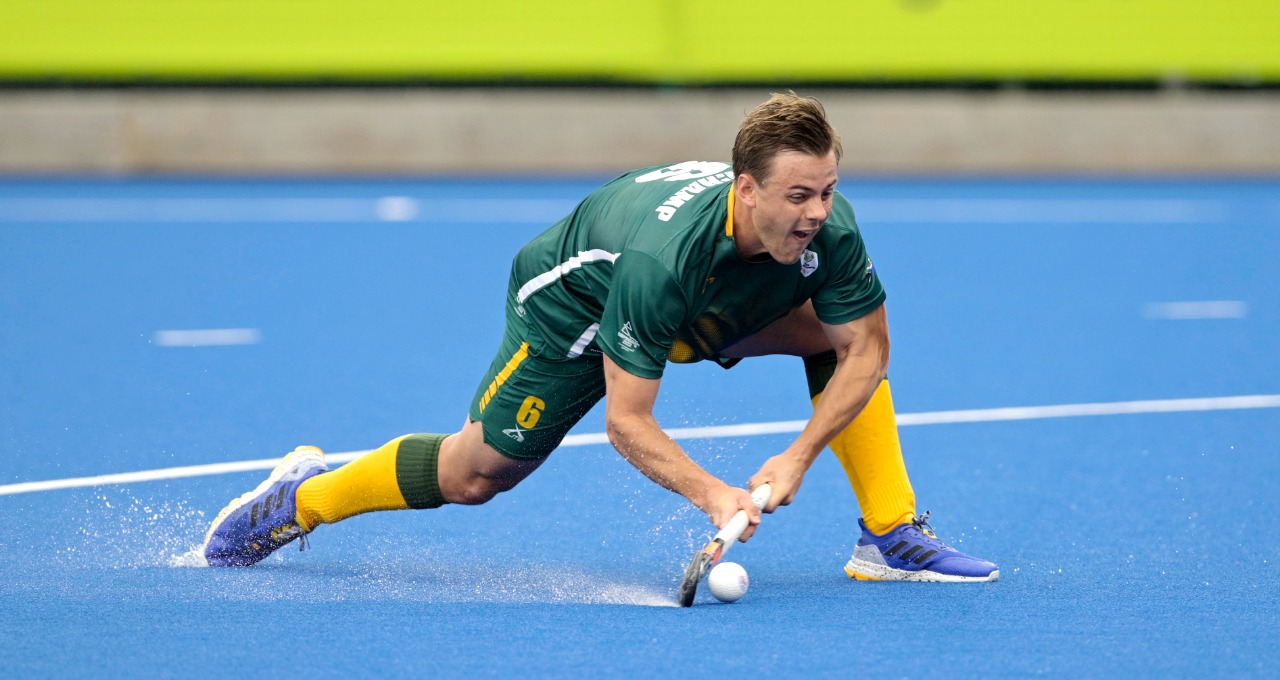 Early in the second quarter South Africa’s pace attack was continuing to trouble the Asians as Bili Ntuli drove into the circle but a last-ditch interception denied the Africans. Pakistan were
weathering the storm effectively while the yellow card ran down, while still trying to create something themselves. South Africa had a fortunate opportunity when a penalty corner was brought down onto the foot but the shot was superbly saved by the stand-in keeper. The yellow card for Pakistan expired and almost immediately were awarded their first penalty corner of the game and they leveled superbly through Rizwaan Ali. 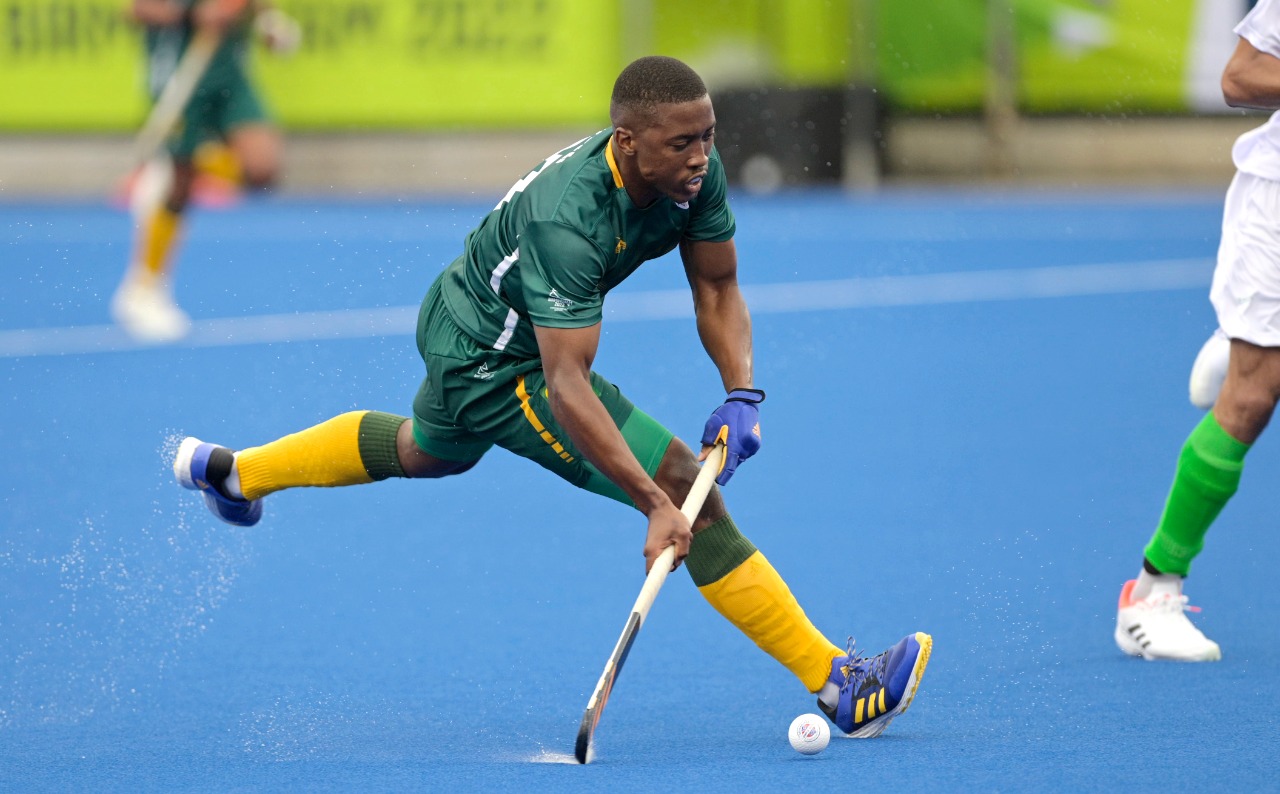 South Africa immediately created a circle entry but were lacking the cutting edge to maximise the opportunities, much to their frustration. South Africa created another quick counterattack that found Bili Ntuli in space and the vice-captain fired it inches wide. And that was the end of the first half of the action. South Africa was the dominant team with more shots, circle entries and penalty corners but importantly only one goal apiece so far.

Early in the second half South Africa earned their first penalty corner of the half through a poor tackle, but the first wave was quick enough to give a second award. The shot was saved on the line and the follow up shot was saved superbly to deny South Africa.

Both teams were a little wasteful in possession and not making the most of their possession in the third quarter. The game was crying out for a moment of quality from either side. Pakistan won their second penalty corner of the match from a Mustapha Cassiem tackle but the South Africans kept it at bay and it remained even. Pakistan had the nearest opportunity with seconds left on the clock in the quarter but a hardly remarkable quarter finished without a goal.

The two sides both appeared like they were waiting for a big moment. South Africa thought they had the chance as Ntuli was sent through from Dayaan Cassiem but the ball was just to far away from the South Africans striker to make the chance count.

Siya Nolutshungu was called on to make a big save as the Pakistanis sensed a great opportunity to steal the points and he answered the call superbly. South Africa then won a penalty corner after quick work from Taine Paton and Ntuli to set up another opportunity. An absolute rocket penalty corner from Guise-Brown struck the face mask of the defender on the line and a penalty stroke was awarded for the South Africans. Guise-Brown took the stroke and finished superbly to the a 2-1 lead with 6 minutes remaining on the clock.

Pakistan were wrongly awarded a penalty stroke when Mustapha Cassiem made a superb goal-line save and fortunately the review was in hand to overturn the decision. However, Pakistan were still awarded the penalty corner. Siya Nolutshungu pulled off a superb save to deny Ali and South Africa held on to the narrow lead with 5 minutes remaining.

Pakistan were dominating the territory and possession as they looked for an equaliser with South Africa defending with tremendous heart and spirit to try and wind down the clock. The counterattack danger for the South Africans was still present as Dayaan Cassiem created an opportunity but Pakistan kept it out. 2 minutes remained.

Pakistan won a penalty corner with 40 seconds remaining on the clock when the ball struck Beauchamp on the foot. And with 20 seconds left they put the ball in the back of the net to pull
level and devastate South Africa.