The Proteas Bowls squad to play at the 2022 Commonwealth Games has been confirmed with a number of new faces in the mix.
The Women's team will once again be spearheaded by Colleen Piketh, who is no stranger to the competition at the highest level having represented South Africa at four previous editions of the "Friendly Games". 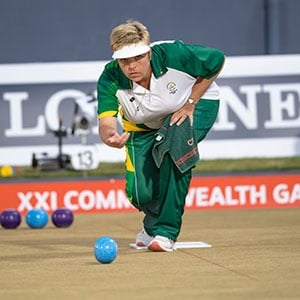 Piketh's medal tally is healthy, she has four medals including gold at the 2014 Games when she skipped the pairs side to victory.
"It's going to be a challenge for sure, but we are up for it," says Piketh. "I'm delighted to be playing and we've got a great team once again. Our history at the Games is proud and we will be ready to give our all to add to the country's tally.
"The greens will be slower than normal which should suit us. Our final team training camp is this weekend and I'm sure there's going to be a lot of buzz and excitement as we get ready to board that plane."
Joining Piketh in the team Western Province Bowls star Anneke Snyman, who recently won the WP Masters singles event, and the in-form Esme Kruger. Both Snyman and Kruger have experienced winning a medal at the Commonwealth Games before and the experience will no doubt be helpful once competitive play gets underway. Young duo Bridget Calitz and Thabelo Muvhango round out the team.
Jason Evans leads the men's team and will have the experience of Pierre Breitenbach and Prince Neluonde to help lead their medal hunt. All three have experience playing at the Commonwealth Games and will be looking to make their mark when coming up against traditional rivals like England, Scotland, Australia and New Zealand. Wayne Rittmuller, who has been capped by South Africa before and now makes his tournament debut with new cap Bradley Robinson completing the unit of 5.
"We are very proud to announce our team and we trust that they will continue the country's excellent record," says Bowls South Africa president Heather Boucher.
"Our Proteas have been training hard and have every reason to believe that they will give their utmost in what promises to be a very exciting edition of the Commonwealth Games.
"It's a young side with a few new faces but that said, there's still a lot of experience in the team and so I think there is a good balance overall. We wish them well and look forward to watching them in action in Birmingham."