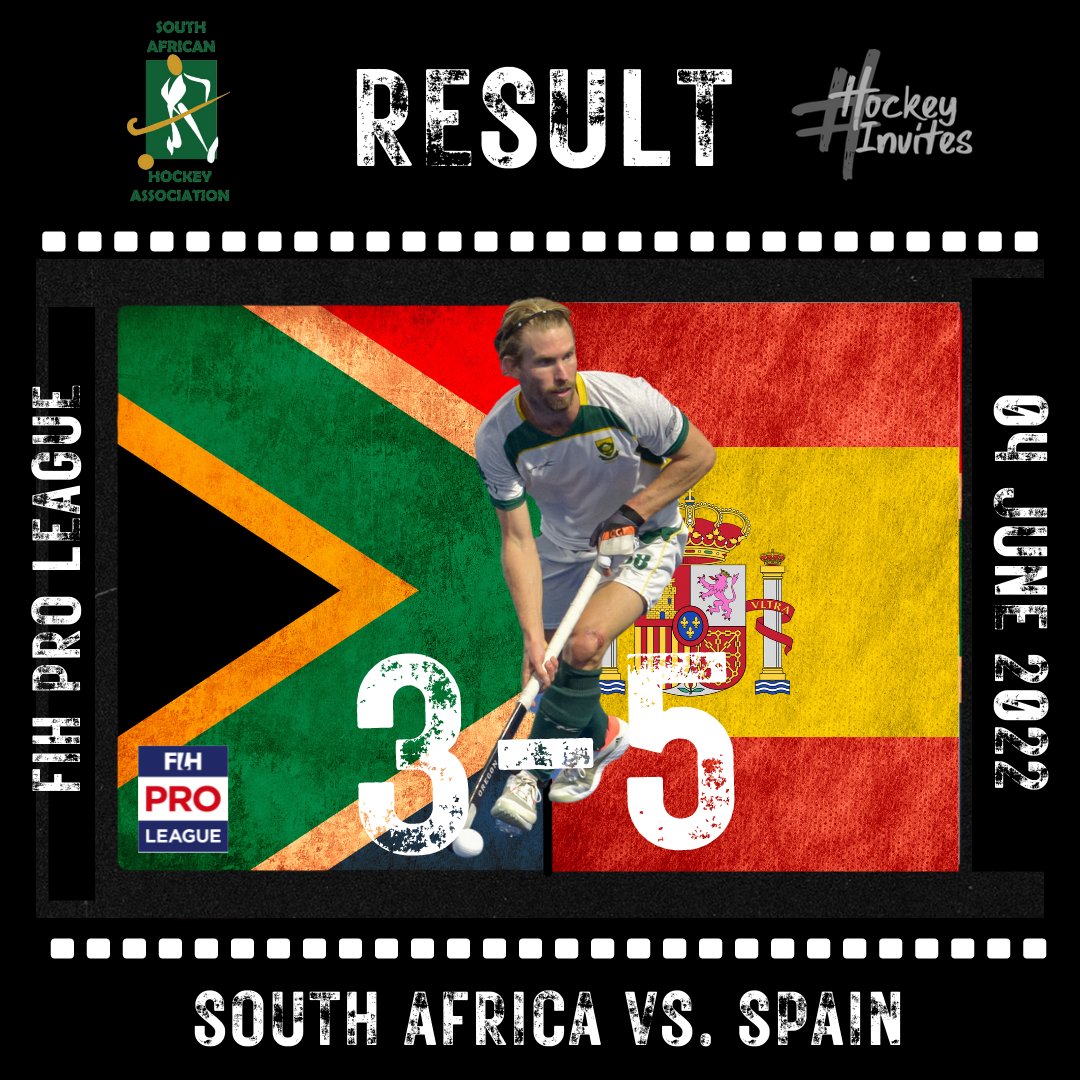 The South African Hockey Men continued their adventure in the FIH Pro League today as they took on Spain at the Terrassa Stadium today. It is a stadium that the SA Women will play their pool stage games at the FIH Hockey Women’s World Cup in just under a month.

The game started with an acknowledgment of Jethro Eustice who was earning his 150th cap for the South African Hockey Men.

Spain laid early siege to South Africa’s defence and was able to win two penalty corners in the opening exchanges, however, both were well defended while Gowan Jones also pulled off a very good save with his right foot from a snapshot across the goals. A third penalty corner was won off the foot of Mustapha Cassiem, but Gowan Jones pulled off a good instinctive save. Unfortunately for Jones, he had to face another two penalty corners in the next couple of minutes and eventually the fifth one counted with Mirralles smashing it into the top corner superbly.

Spain continued to pour the pressure on the African Champions, but Gowan Jones and his defensive lineup were able to hold the hosts at bay and ended the quarter 1-0 down.

South Africa gained a bit of confidence early in the second quarter and won a penalty corner 3 minutes in. A great first wave run by Sanches denied the South Africans the equalizer at this junction in the game though.  Despite South Africa making the game a bit more competitive, it was a moment of individual brilliance from Clapes as he slalomed through and beat Nolutshungu to make it 2-0.

Despite a couple of half-chances, neither side really tested the keeper, and the quarter and first half drew to a conclusion without the score having changed at the break.

South Africa conceded a third in the third chukka after Gowan Jones made a good save, but the rebound was put away to the keeper’s frustration. To the credit of the South Africans, they continued to look for something in the game and they were eventually awarded a penalty stroke as Brad Sherwood was bundled over. Jethro Eustice stepped up and fired home superbly to cap his milestone appearance with a goal for his country.

Both sides traded penalty corners, both sides were repelled, and the quarter reached its conclusion with the score 3-1 to the hosts.

South Africa started the final quarter superbly and Taine Paton was given space aplenty and punished the hosts with a rocket low and hard, breaking the gap to just 1 goal. That charge from the South Africans saw the Spanish fight harder and they scored twice to take the game out of reach for the South Africans.

South Africa continued to show fight and pulled another goal back as Taine Paton scored from a penalty corner variation and were awarded one right at the hooter for a chance to close the score line even further, but just wide.

Once again, a slow start proved costly for the South Africans who continue to learn and grow in the FIH Pro League.